Songzhuang, a local village in Beijing’s Eastern suburbs, became famous for its art community in early 2000. At the same time, urban migration of younger people resulted in an increasingly aging village population left in charge to look after the youngest, combined with local art visitors, each with their own needs for and within public spaces. Understanding the challenge of offering versatile and inclusive communal facilities, the Songzhuang government has commissioned Crossboundaries to regenerate a linear streetscape adjacent to a parking lot, close to the Xiaopu Cultural Plaza, into a lively outdoor community park. The L-shaped plot features a series of outdoor ‘rooms’ – spaces, whose designs trigger but not limit certain uses – along a linear loop track, a connecting element meandering between street side pavement to an extending park These rooms offer different levels of enclosure and boundary following a sequence. Transforming the initial street corner into a small plaza, the first room opens up a semicircular space defined by its surrounding angular brick walls in combination with large mirror surfaces. In the morning, tai chi and fan dance are performed, while the evening attracts groups of more rhythmic dancers. The occasional dog owner with his pet is seen along the bright yellow asphalt of the loop starting from here. The second room is one of tranquil interaction: long benches along the stepping profiles of interspersed brick walls invite Chinese chess players and their audience, chatting groups of elderly ladies in the shadow of the trees, grandparents with babies. On the weekends, younger people bring drinks from the cafes across the road to take selfies in front of the grey brick and layered perforated Corten steel backdrop. On the corner to the extending park, the third room is all about children’s play: a bright yellow room with differently sized openings in the brick walls for peek-a-boo and hide-and-seek, and with connecting speaking tubes through which shouting and singing can be heard. In front of it, grandparents, parents, and other caretakers can watch the children play from a distance. Inside the rectangle of the park, the yellow loop track itself spans up the fourth room, increasing in width to become an open-air gym, a sport space in the middle of green meadows. Between the sports equipment and the circular seating, all community members find their own place. The community park has proven a great success with the local population, its variety of inviting, bright spaces adopted and occupied instantly – a true example for integration and interaction of all age groups. 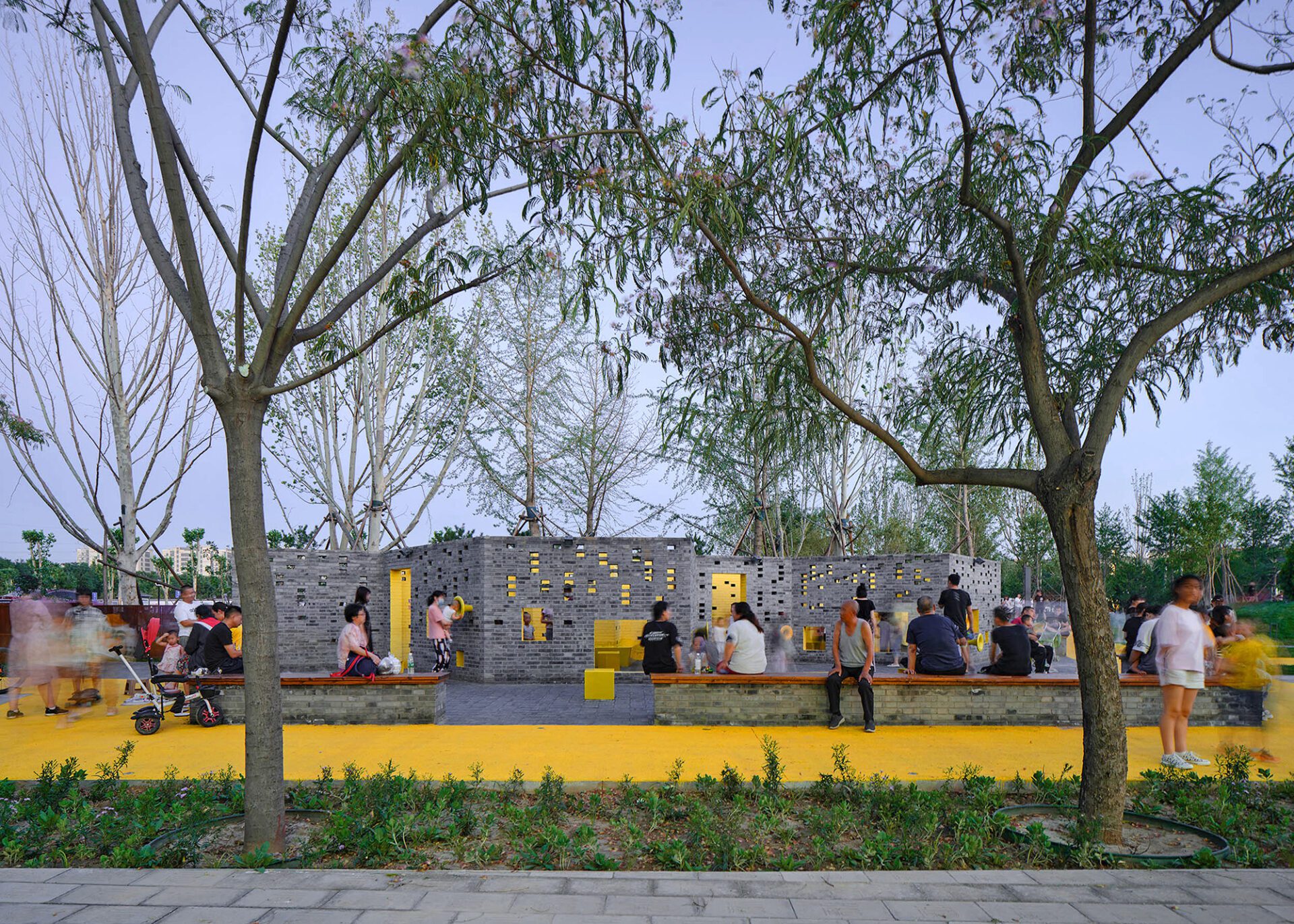