It was an international project competition for an urban elevator and its the respective connecting aerial passage with the roof of the Vigo intermodal station, over the Atlantic highway, in the lower part of town, within the strategic plan for urban regeneration "VIGO VERTICAL". The awareness taken on the special circumstances that surrounded a mobility problem in this area of the city allowed to transform a problem into an opportunity of exceptional interest and urban attraction. Panoramic urban elevators belong to the restricted set of public facilities that transform the image of the city. In addition to the civilizational advance that they represent in the daily lives of populations, improving accessibility, social inclusion, environmental protection and the sustainability of the resources, panoramic elevators are constituted as landmarks and symbols of collective identity. Who remembers the lower area of Pombaline without the Santa Justa elevator? Or Salvador da Bahia without the haughtiness of the Lacerda lift? Or Oregon without the Jetsons-style municipal elevator? They are objects that flee from the ideals of architecture. Before being constituted as architecture of the city, they are, to a large extent, construction – structure and engineering. The work was led by the engineering firm Arenas Y Asociados and the design shared between NOARQ and AM2. The elevator establishes the contact between the cover of the Vigo intermodal station – a Morphosis project led by Pritzker Tom Mayne, consisting of a high-speed train station, bus station and shopping center – and the area of Avenues Garcia Barbón, Rosalía de Castro y Areal, 50 m below. The proposal consists of a suspended pedestrian walkway in the shape of a circle with a diameter of 90m and a tower with a trapezoidal base of approximately 6x6 m to accommodate two elevators with a capacity of 21 people each. The tower is located at the top of the ramp on Serafin Avendaño street, marking the axis of the street, capturing the attention of the citizens of the sea port area of Vigo and in particular the users of the Guixar railway station. At the top of the tower, we divided the pedestrian access to the roof of the intermodal station into two arches that form a ring. These are supported on each side by the crystallized volume of the central panoramic atrium that emerges from the roof of the intermodal station. The route in the east arch is made inside the arch profile, making it more comfortable for the transit of the citizens, less transparent, less interesting from a panoramic point of view, but defending the intimacy of the habitants of the recidential towers of Calle García Barbón. The route of the west arch is carried out in the open air, over the profile, projecting towards the ocean, making it attractive for tourists. The front face of the tower and the outer face of the circle are made of silkscreened glass, with a white appearance: at night, from an outside perspective, it reveals the metallic structure and the movement of the elevators while during the day, from an interior perspective, the view of the city. The slabs and wall profiles are covered with white steel sheet, hiding the steel and concrete structures. 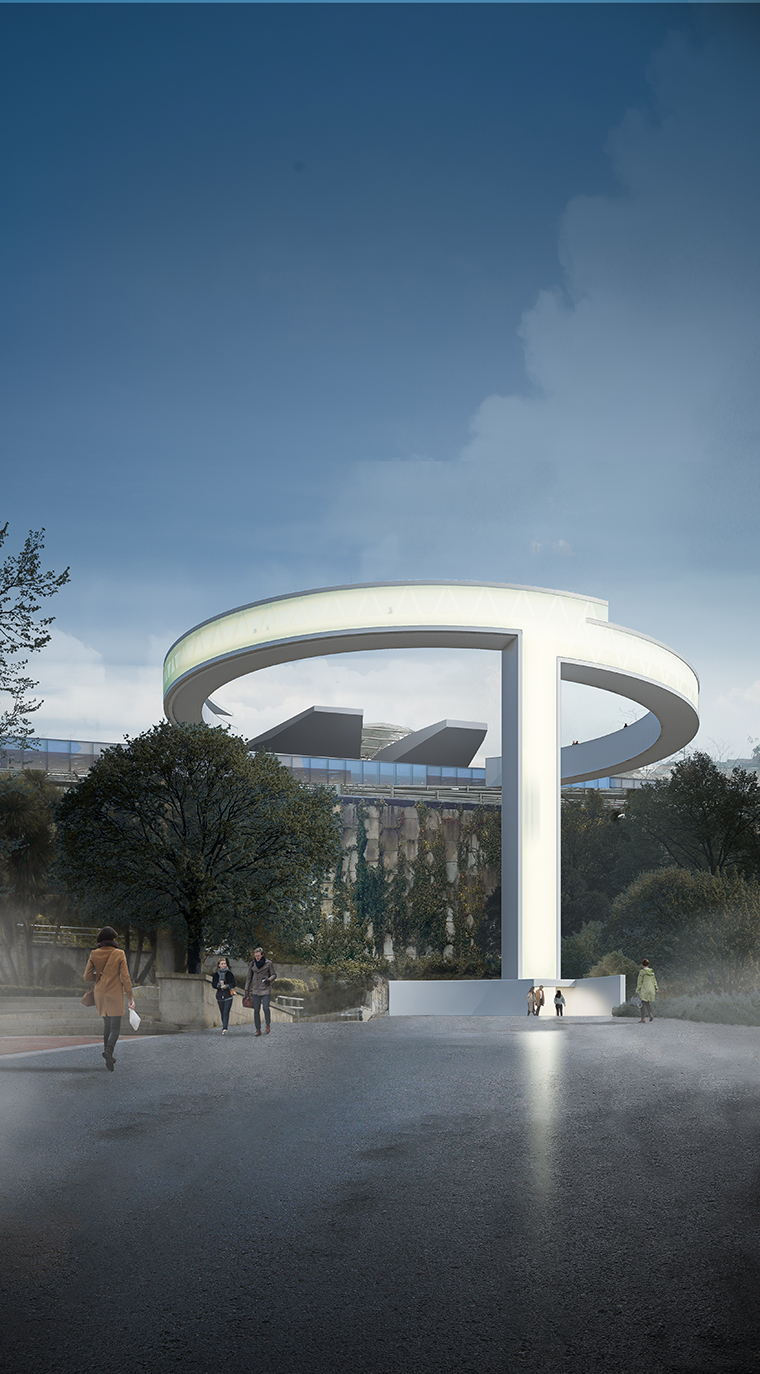 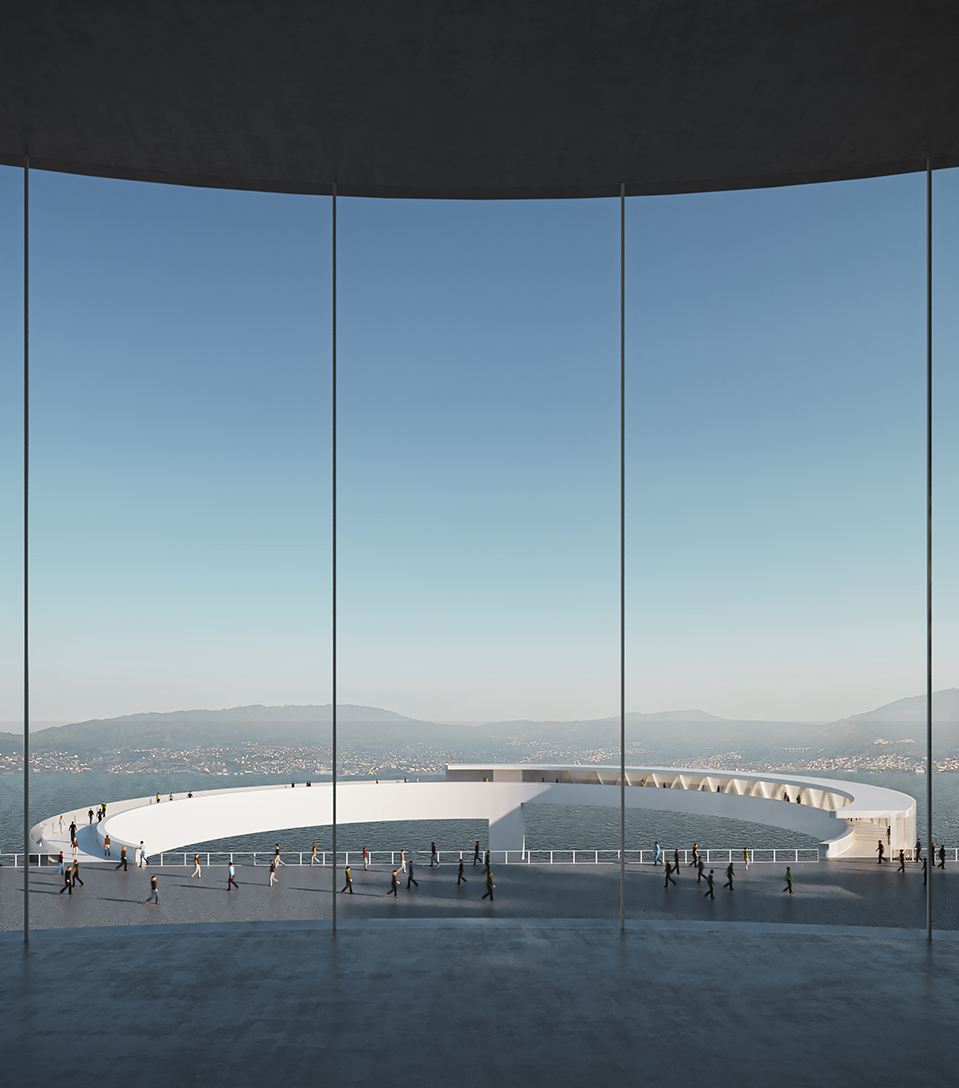 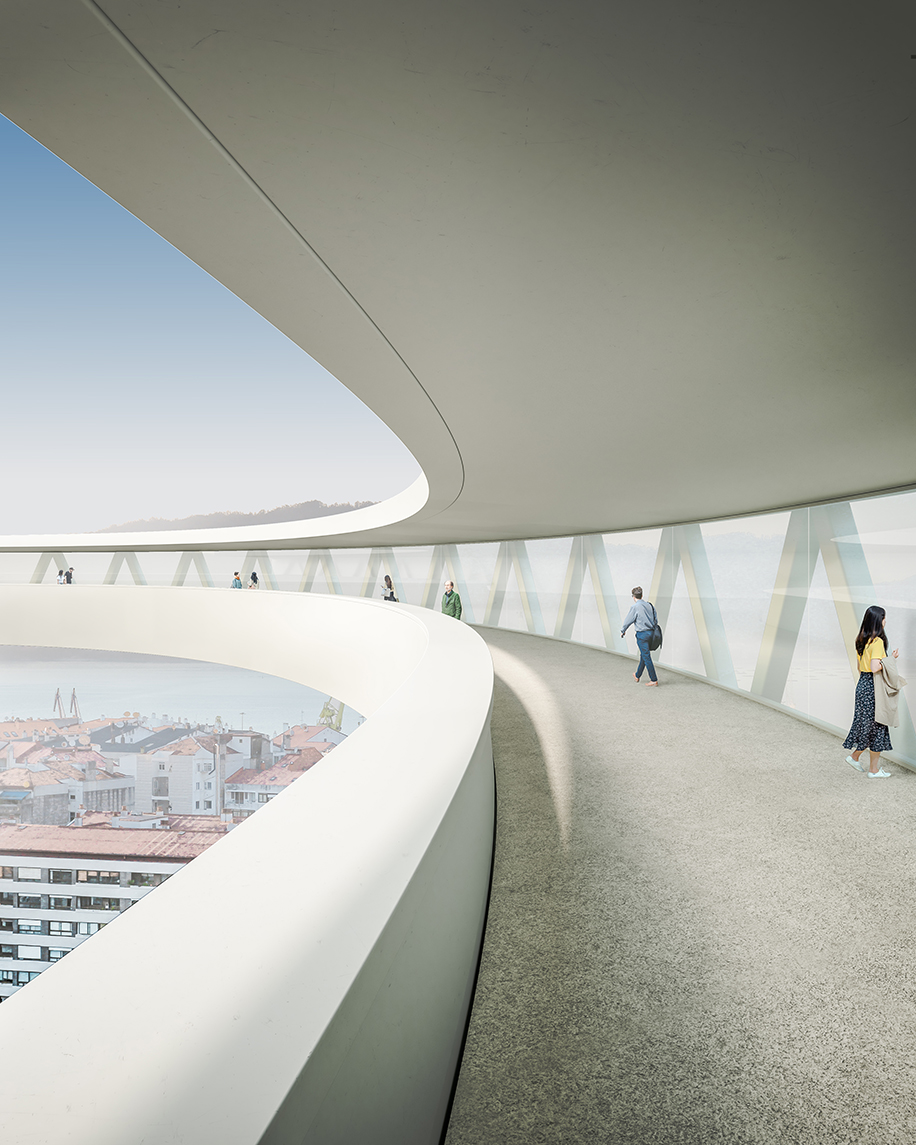 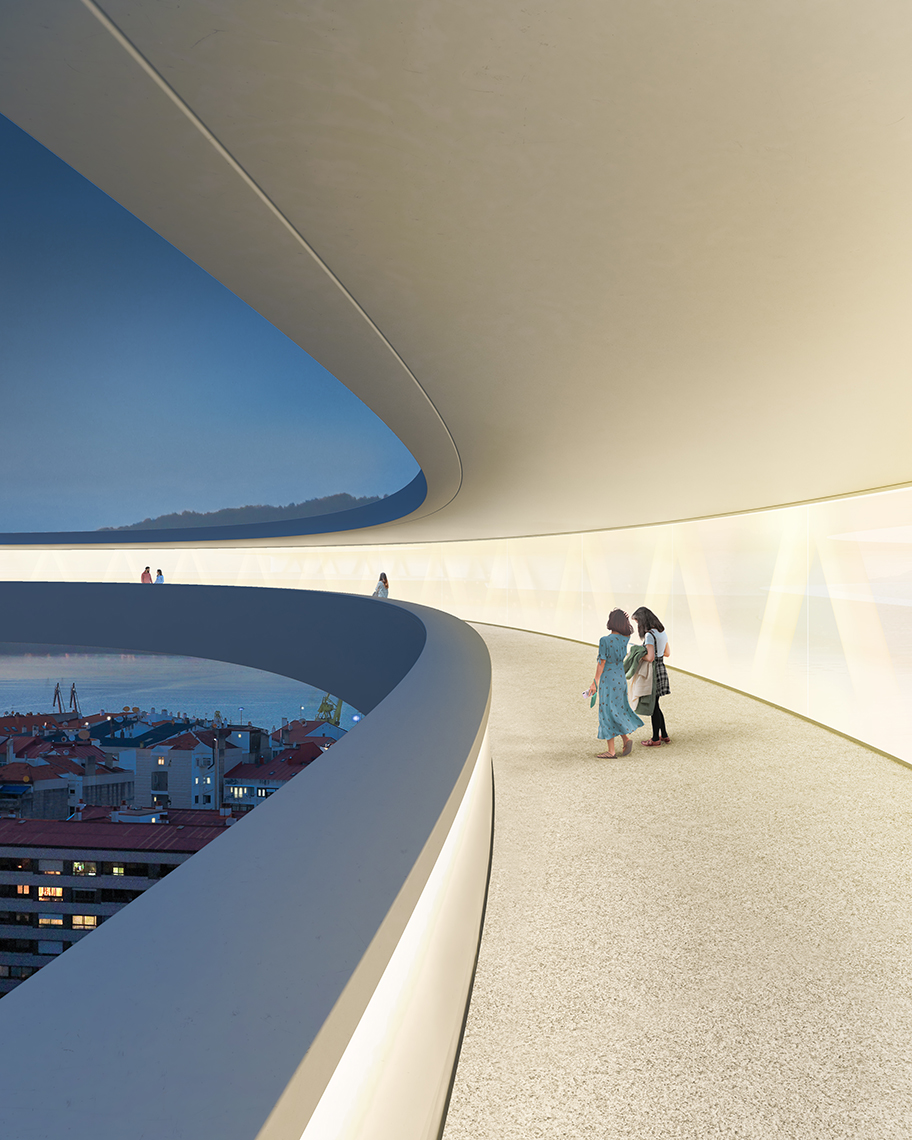 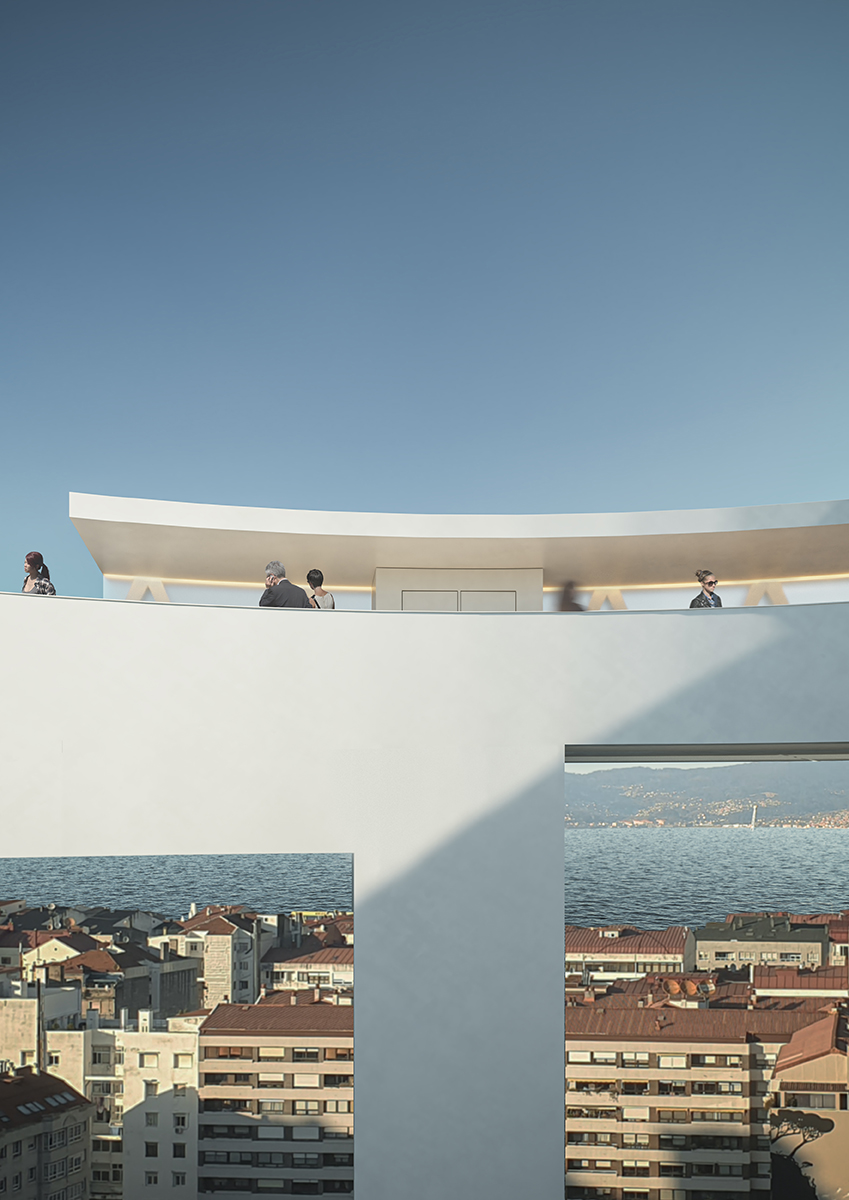 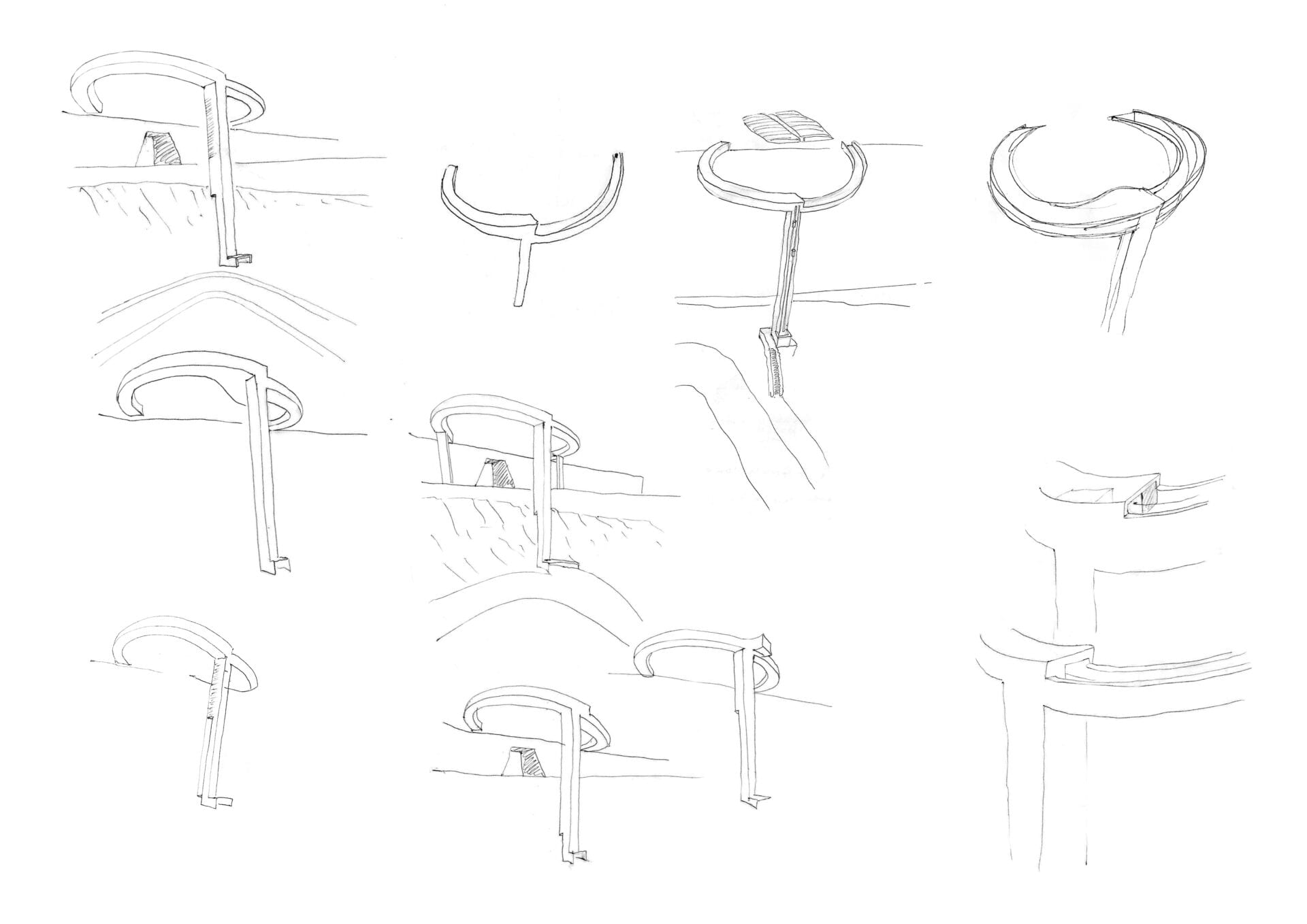 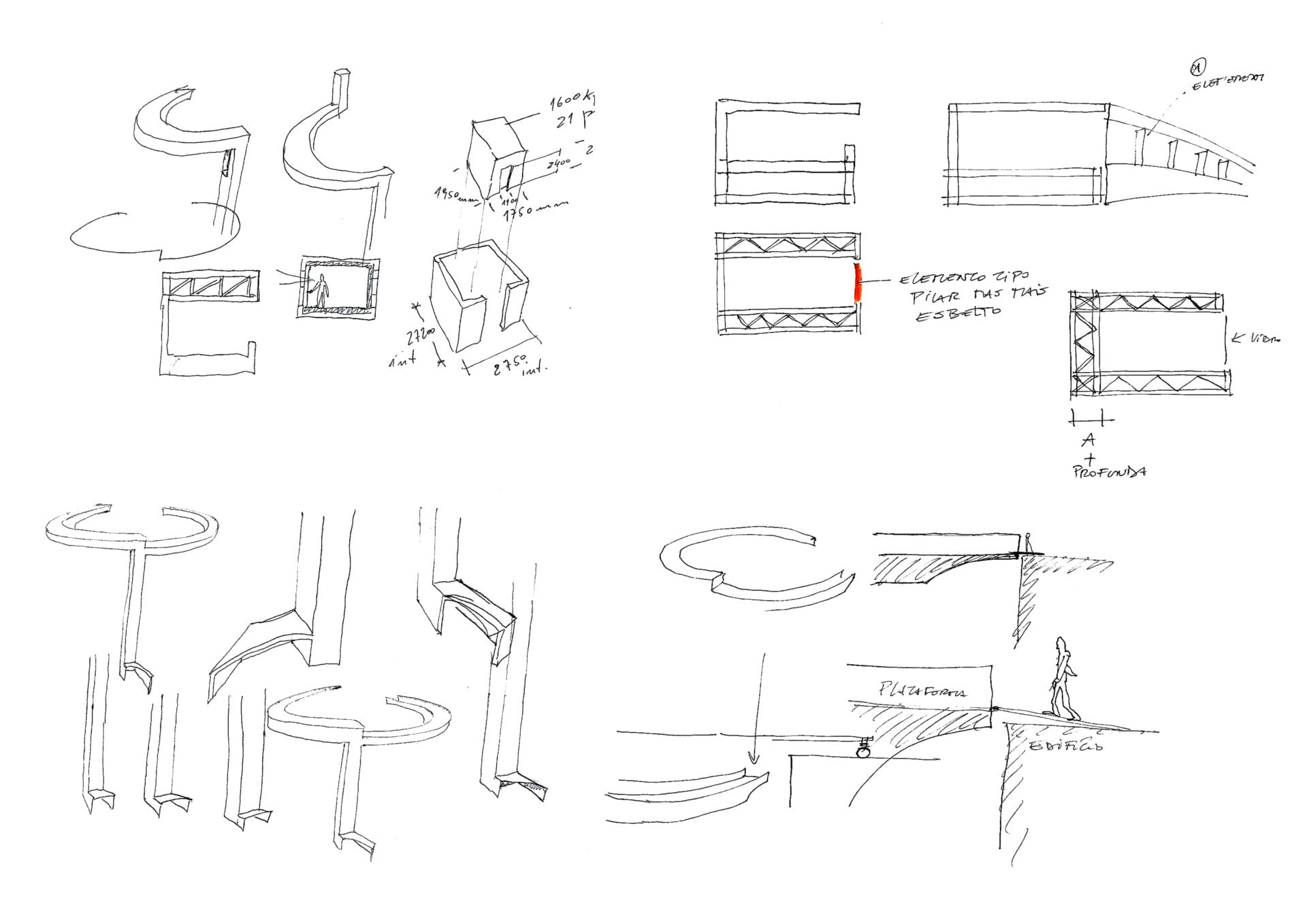