The 85m2 small garden house is surrounded by nature on the edge of the Müritz National Park in the Mecklenburg Lake District. The two-storey house has always been used as a residence. Originally for the accommodation of farm workers as a so-called reaper's house, then as a residential building for the employees of the surrounding farms. The house has been renovated from the ground up and can now accommodate up to four people. On the ground floor there is a large living room with a glass folding wall that can be completely moved to the side. So the view can wander unhindered directly into the nearby forest. The kitchen and a guest toilet are now housed in the attached former goat barn. A wooden staircase made of Douglas fir, which rests on a platform, leads to the upper floor. The hallway, wider than usual, with its built-in bench in front of the windows, can be used as an additional space for relaxing, working or reading. There are also two bedrooms and a shower room on the upper floor, each with sliding doors painted in the same color as the walls. While taking a shower you look out over a park-like landscape; lying in bed in the forest. In the bathroom, the window sill was designed as a seat made of used, old ironwood. In the first life, the bench was an Indonesian pavement. The builders wanted the surrounding nature to flow through the house. The color concept is therefore kept in natural, unobtrusive colors. The door frames on the ground floor are made of teak, but only used, old wood was used. Originally, the frames were shelves in a cupboard. The boards of the Douglas fir wooden ceiling on the ground floor are cut at a 45° angle, resulting in a herringbone pattern. In terms of material and appearance, the ceiling forms a beautiful contrast to the floor, which was laid out with Porfido natural stone tiles. An electric heating mat was laid under all floors, including on the platform, which generates sufficient heat when required. Until the planned stove is completed and connected, a discarded cast-iron workshop stove serves as a replacement. The natural stone laid throughout the ground floor extends into the kitchen. There he encounters textiles, wood and the color used in the rest of the house on the walls and ceilings. The curtain and the 60mm thick kitchen worktop made of solid wood offer a contrast here. Fittings, lights and window handles are black throughout the house. The most important requirement for the refurbishment was not to change or not to preserve anything of the outer, old substance of the building. Only the windows were replaced with new ones and the masonry of the facade was thoroughly cleaned. The old bricks shine in new splendor today. 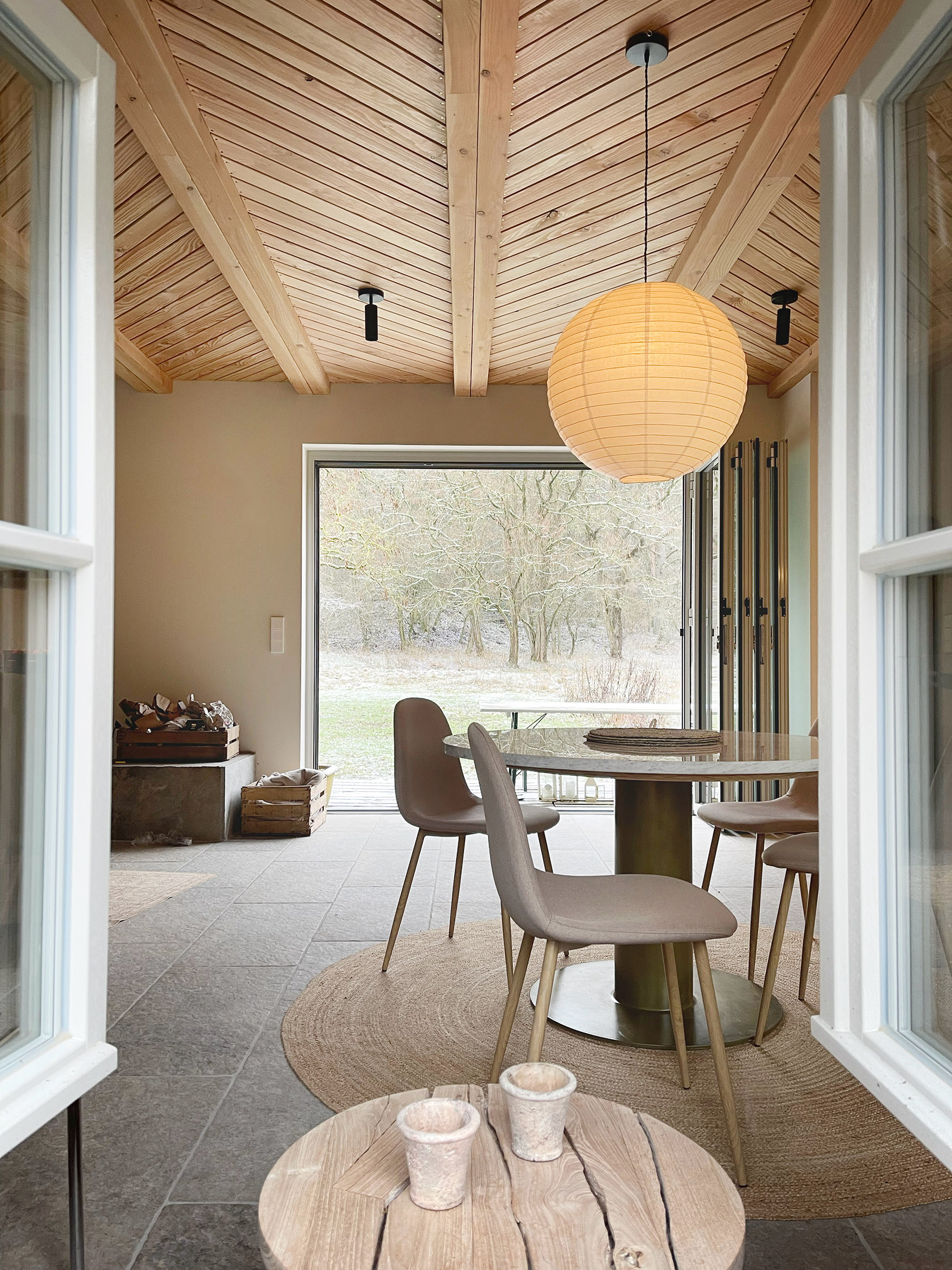 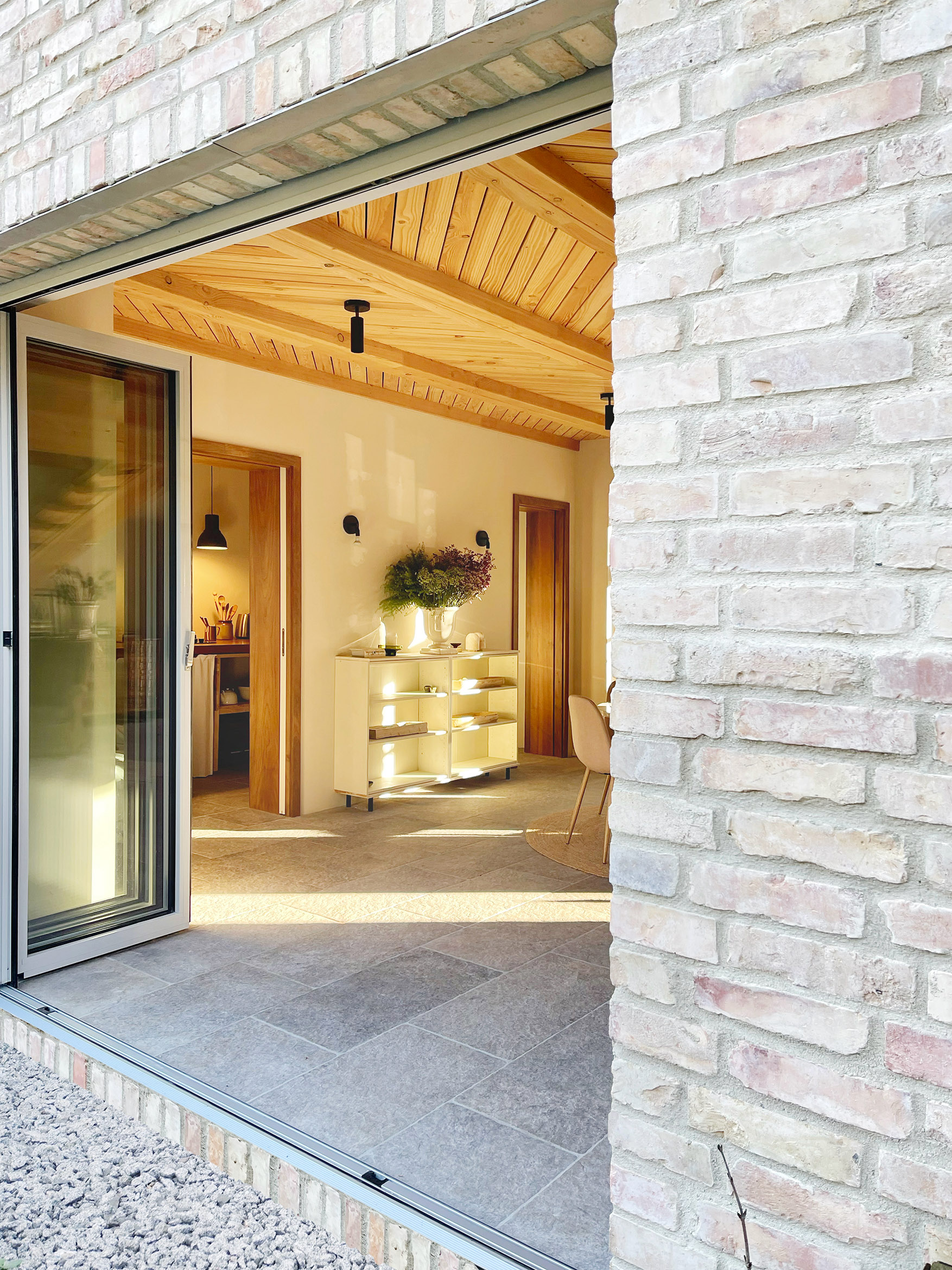 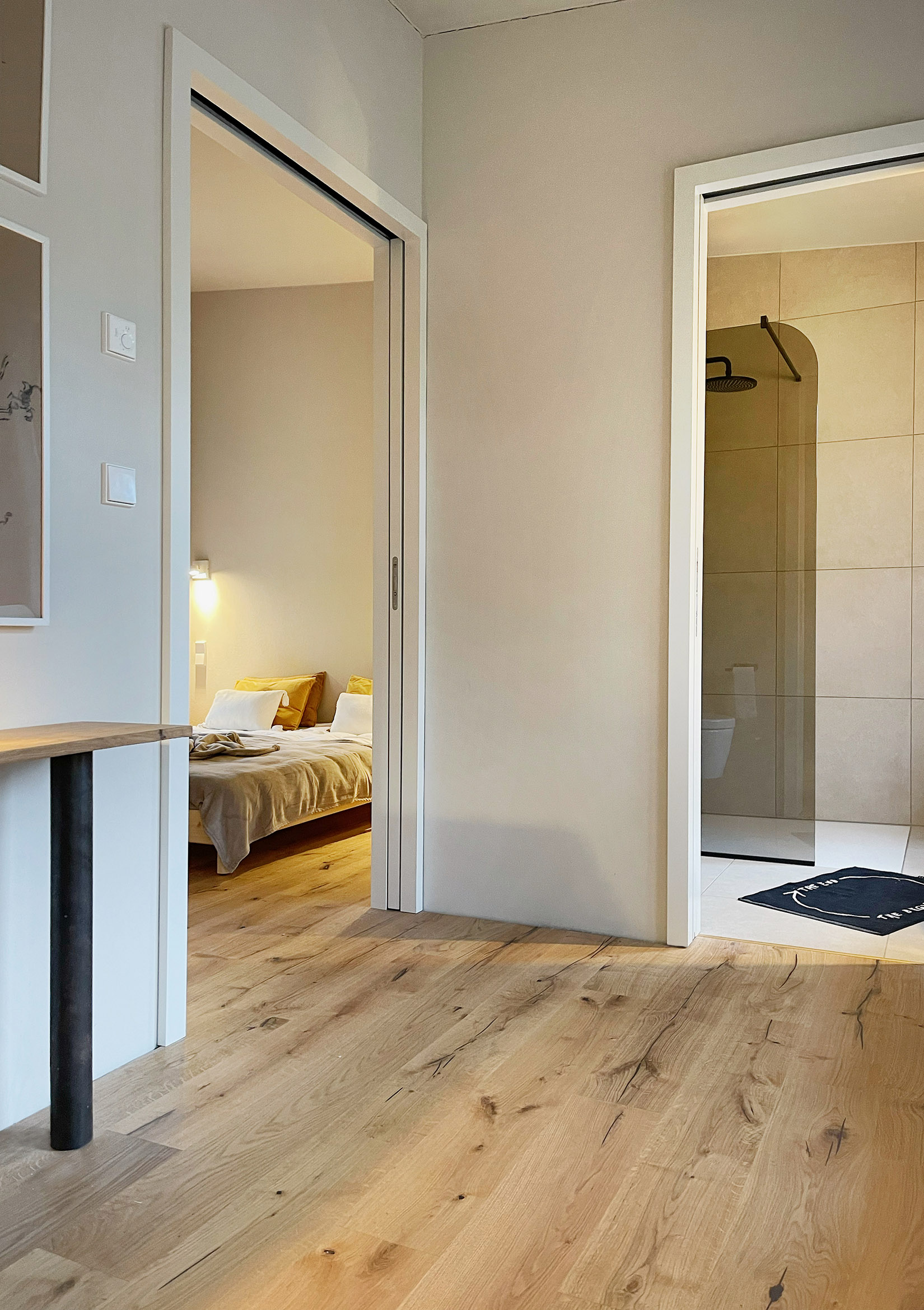 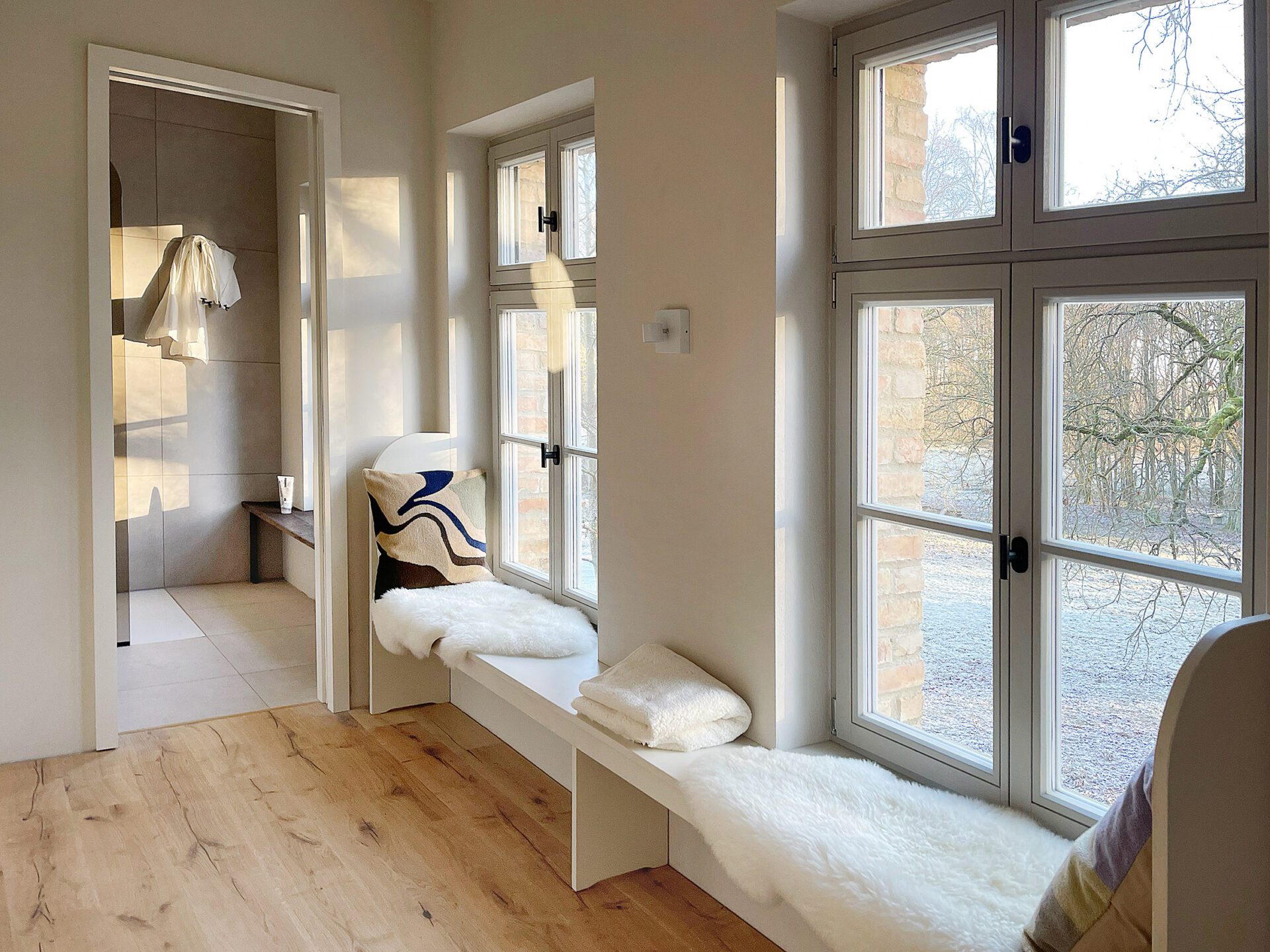 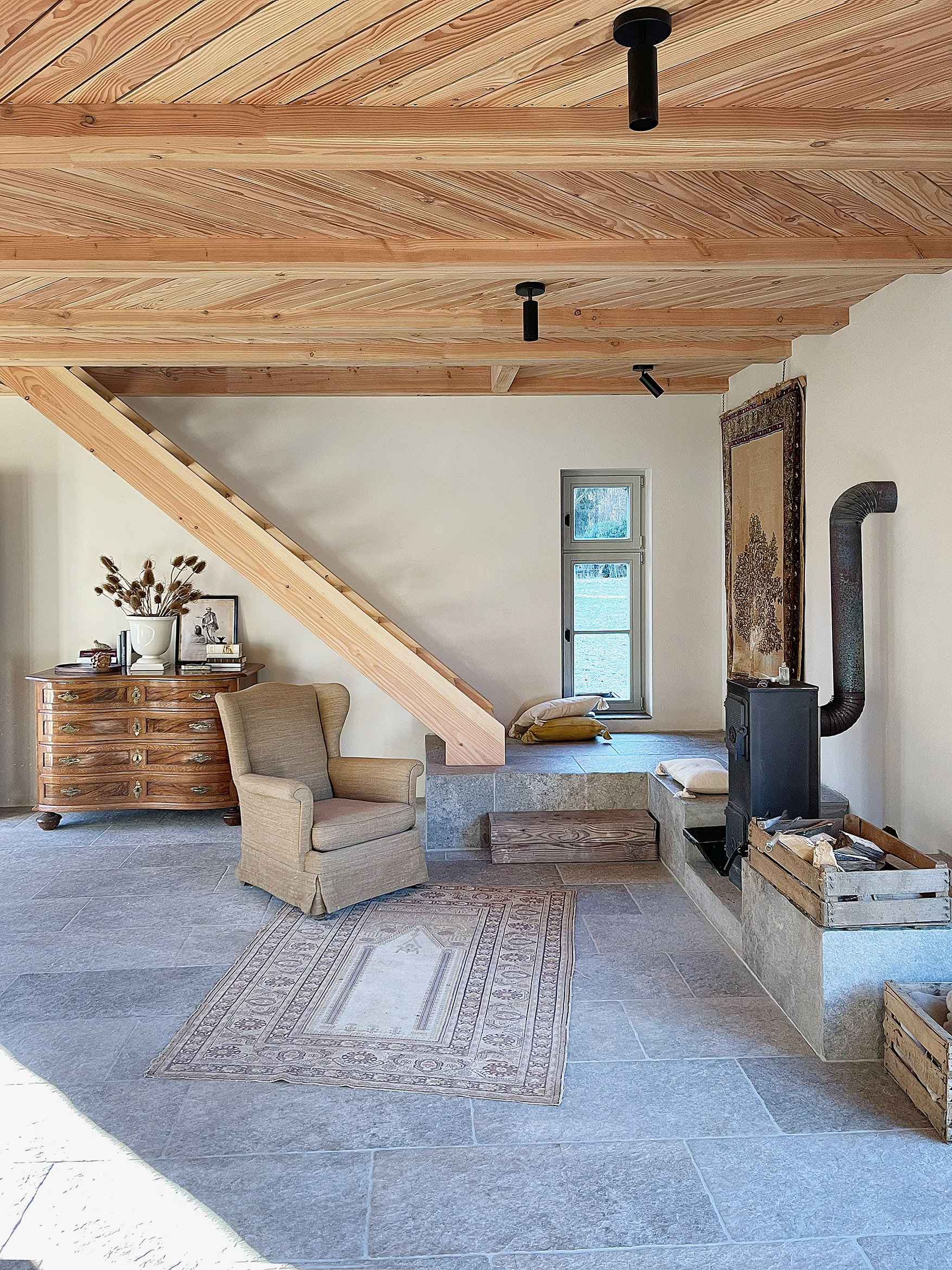 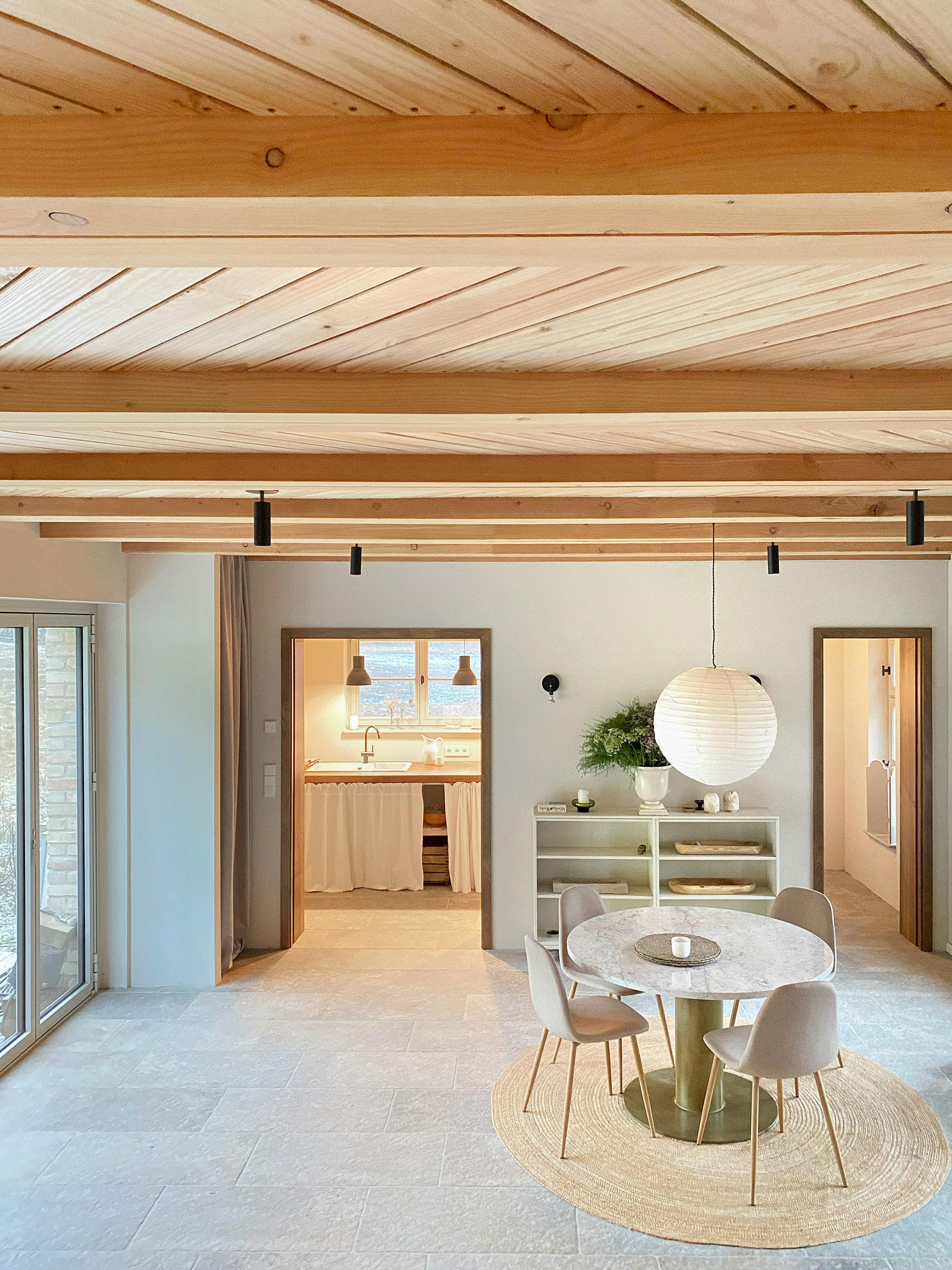